School's about to start again and I know how most of you feel about that...So we wanted to squeeze in a little bit of fun before that happens 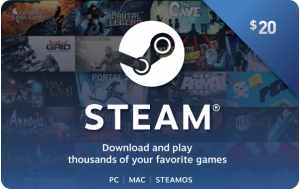 ​
This month, we're changing it a little bit. Instead of giving away a game, we're giving away a $20 Steam Gift Card and letting you decide what to spend it on!

To enter this giveaway, you must be a registered user with a minimum of 3 posts.

​
You asked for more adventurous games, so here it is!
Cool yourself off from the summer heat by diving into an underwater city and then dry yourself off by flying up to a city in the sky.
We'll be giving away the BioShock Triple Pack Series for donators and above.

The giveaway will end on September 7.
Good luck and have fun at school!

*Not sure where to enter? Click the "Raffles" tab in the menu above

The world and player's characters will be reset so that we could go through the game again and enjoy it. There will also be new builds to gaze at. And yes I know it is annoying to have finally gotten to a point where everything was easy and then it get taken away from you only to have to do once again, but this time you will most likely be gearing up with most other people instead of begging for gifts and slowly making your way up!

July 4th was the day America became free from Britain, and this month we've released the beta survival server to the public. To celebrate these moments of freedom, we'll giving away 4 awesome games!
Also, shoutout to all the members who donated to support our servers/community. We reached our monthly goal of $50 for the first time and you guys will not believe how much we appreciate your support.
So, a BIG THANK YOU to @L'Mond, @Nicholas, @Waterlord, and @Mrcoon


​
To celebrate the survival server's release, the first game that we're giving away to everyone is Terraria
To enter this giveaway, you must be a registered user with a minimum of 3 posts.

*Due to the lack of resources, we have unfortunately shut this server down until further notice.*​
If you're(you):
•New to Terraria
•New to the survival aspect of Terraria
•Have a friend getting started on Terraria

Then this is the server for you! We have in-depth signage and special warps for you or your new friend to make use of!

Plus the lobby is amazing and it serves as a perfect example of how beautiful builds can get.

Its the same ip (play.bippityserver.com) but instead of port 7777 you're gonna wanna go to port 7778

Hope you enjoy it, let us know if you have any suggestions/feedback!

Here's my submission for a possible server banner. I spent my whole bus ride to work working on this.

​
Yup, it's been decided that the map/server is stable enough to be released to the public

Since we're still in the early stages of development, you will notice that a good amount of features are missing/incomplete. The server will be under constant development and whenever a feature is considered to be stable enough, we will add it to the server as soon as possible.

The main features that are missing right now are Automatic Rankings and the ServerShop. We'll be working on getting these out into production ASAP.
Whenever we add something, we will post the change in the Server Updates thread. Also, we're always open to suggestions so feel free to suggest things in the Suggestions/Requests thread.

Because the server is still in heavy development, there will be frequent resets, meaning that characters will be reset to default and quite possibly the world also. (sorry

We'd like to mention our amazing builders for the server. Without them, this would never have been possible, so thanks @Lynx @Beave @NogiChan @CubeGameMaster @GuitarSlayer !

Summer's here!
I hope everyone's having a great time!

To make your summer even better, why not play a game of Soccer...with ROCKET-PROPELLED CARS?

​
This month, we'll be giving away a copy of Rocket League!
To enter this giveaway, you must be a donator.

The giveaway ends on July 1st.
Best of luck to winning!

*Don't forget that the giveaway of Abyss Odyssey is ending in a week!
https://bippityserver.com/xf/threads/its-back-steam-giveaway-abyss-odyssey.659/

Not sure where to enter? Click the "Raffles Tab" in the menu above

​
Sorry about that, I guess I owe you all an explanation

I decided to switch our database type from SQLite to MySQL, basically switching the server database from a local file to an online database server.
Unfortunately, I was unable to successfully export the existing database over to MySQL format, which resulted with everyone's existing user account to be removed.
The reason for this migration is so that the database can be more flexible; a good example is that we can now use the Ban Viewer. Players have been getting banned recently and I felt like it would be useful for them to see why they were banned.

For existing users, you'll need to re-register on the server, but you won't need to make another introduction to validate yourself. If you've already validated before, you should be able to see the Validation notice at the top of the page. (Follow this tutorial if you need help: Validating Your User Tutorial)
As for existing users who had special ranks, talk to a staff member to get it back

Once again, sorry for the confusion.
Continue...
Closed Hunger or Quest System?
3 1,733 by Bippity : Jun 1, 2016 at 11:08 PM
So far the only things the economy (Server Coins) has been used for are the ServerShop, trading, and a few paid commands (/heal, /rollitem, etc). While these features are great, I feel like there could be a few more unique features that make use of this awesome economy system (SEconomy developed by Wolfje).

I've been thinking of trying to make one of these systems: Hunger or Quests
Now, I don't know if I'll actually go through with it but if I do, I would like to know which one would you guys prefer the most so I can devote my time on the more popularly requested feature.

Hunger/Thirst System:
Basically, a player will have a server-sided "Thirst" and "Hunger" level. The levels will decrement each minute and if they fall below a certain level, the player will began to lose small amounts of health. If the levels reach 0, the player will start dying really fast.
To regain hunger, a player will have to eat food items (http://terraria.gamepedia.com/Food_and_Drink_Potions). To regain thirst, a player will have to drink liquids such as Bottled Water, Ale, and Soup.
Since some of these food items are hard to acquire, trading/buying/selling in the ServerShop becomes more essential. And some of the items would be crafted through Custom Recipes.
This seems fairly "simple" to implement, the only major problem I...
Continue...
It's back! -Steam Giveaway- Abyss Odyssey
1 1,466 by Bippity : May 30, 2016 at 12:10 PM

So it's been awhile since we had a giveaway...
The reason why there hasn't been any monthly giveaways for awhile was because for all of the giveaways that we had, each giveaway only had 2-4 entrants (0 for donator giveaways). Because of this turnout, I felt like it wasn't worth purchasing these games, but instead I should save the money to cover the rental cost due to the lack of donations.

But with the new influx of enthusiastic members, I'm hoping that things will be different this time.
So for this month to mid-June, we'll be giving away "Abyss Odyssey" which costs $15 on Steam.

​
To enter the giveaway, you must be a registered member with a minimum of 3 posts.
Best of luck to winning!

The giveaway ends on Saturday, June 18.

Not sure where to enter? Click the "Raffles Tab" in the menu above

Help pay for our server fees!
***Please donate through the "Get Ranks" tab***